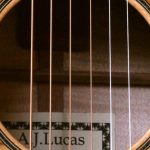 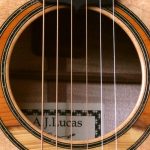 Adrian was born in Lincoln, England in 1957 and began playing guitar at the age of fourteen. After studying architecture, he left college with a degree and a sense of structure and form. A stint as a joiner reinforced his interest in working with wood, originally absorbed as a child in the environment of the family joinery business. Meanwhile constant activity as a musician deepened his understanding of the guitar from a player’s perspective.

He began building guitars in 1990 at an evening class under the tutelage of Roy Courtnall, learning traditional Spanish methods. Having set up a workshop, he soon began exploring his own ideas and has experimented with and refined various concepts over the years, always listening to feedback from the most demanding players.

During his time as a guitar maker he has illustrated a book on guitar making ‘Making Master Guitars’ by Roy Courtnall (Robert Hale 1993). This has become something of a standard textbook in the field.

Adrian builds top quality classical and acoustic guitars. If you want an instrument made in the traditional way, give Adrian a call.