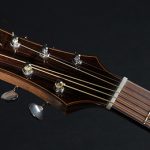 Located in the London’s east end, the workshop is easily accessible by public transport such as: DLR from Bank (connection with Central and Northern line) to Limehouse. Buses 115; 15 or 135 from Algate to Limehouse.

Godefroy has been making guitars since 1998, entirely handcrafted and made to spec. He builds gypsy jazz guitars and nylon string/classical guitars, as well as electric ones, and is developing an arch-top model.

As competition from factory-built instruments is fierce Godefroy believes that a handcrafted guitar needs to be of the highest standard. He achieves this by selecting by hand and carefully craft every piece of wood

He learned his craft on the guitar-making course at London Metropolitan University in east London. Where he trained for four years under the supervision of Dave Witheman, Norman Mayll and Dave King and also worked as a part-time repairer at Hanks guitar shop in Denmark Street in London.