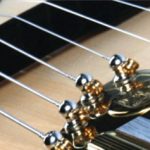 Steve is a genuine guitar making enthusiast who was first attracted to the guitar by its sound and also its simple beauty. He looks on a guitar as something special because it is not only something which is beautiful to look at, but unlike a piece of art or furniture it also has the ability to produce music. Guitar makers of the past have used some of the most fantastic woods bringing a colour and vibrancy not seen in other traditional instruments. The guitar’s sound is also capable of being extremely aggressive, strong and powerful or passionate, light and tender. Steve aims to bring to his Classical / Flamenco , Jazz guitars at least some of the qualities of these traditional instrument makers, combining materials which both work together in terms of musicality and also aesthetically.