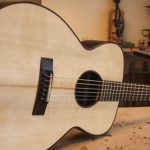 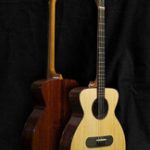 Nigel started his instrument making career at age 17 with and apprenticeship with well regarded luthier Stefan Sobell. He worked for Stefan until January 1990, and then returned two years later and remained until November 2003.

His training followed a traditional path – sweeping up, making tea, learning to sharpen tools, judging and selecting timber, making parts of the instrument, understanding how they went together and what role they played in the production of sound. The standards set by Stefan were demanding, and were constantly raised.

He left the Sobell workshop in November 2003, to set up a workshop to make classical guitars, bouzoukis mandolins of his own design.